"No rescue squad, no swat team, no cavalry, nothing."

Cliff had been well prepared, well prepared for everything. His house was a fortress of brick and mortar ~ real brick, not facing ~ wrought iron and steel fencing, painted white and ornately decorated but it was designed for defense. The castle lacked only a moat. His little slice of earth was impenetrable, from the outside.


Cliff was a worrier and had always been the hoarding type; he stocking up for the winter, was the first at the supermarket when severe weather was in the forecast. His wife, Merry, a pack rat in her own right, was a compulsive shopper who purchased in bulk, particularly sale items, whether they needed it or not. Cliff’s worrying that bordered on paranoia insured they had plenty of storage space for his wife’s purchases. He also had a walk in freezer installed in his basement, with its own generator in case of power failure.

Cliff’s worrying became full-blown paranoia with the Y2K scare; fully believing in the upcoming disaster, he began to stock up in earnest; canned goods, bottled water, cash and gold coins, another generator and extra ammunition. But not too much, as he believed the widespread computerized crash would not result in a total social breakdown and order would be restored rather quickly. He still had faith in his government. The events of 9-11 and the aftermath really got him rolling, stockpiling for a much longer siege, a back-up generator to the back up generator and a cache of weapons, a militia unto himself. He had faith in none other by now.

Cliff had the means to indulge his survival fantasies having inherited a very successful medical supply business from his father and substantial real estate holdings from his in-laws. As the government warnings increased, the wars broke out, the crime rate grew, the rolling disasters around the world; as his fears grew his stockpiling grew more elaborate. The war in Iraq, the deployment of the national guard both there and along the borders, Cliff knew the lines of defense, the rescue services, the first responders were stretched too thin. When disaster struck, there would be no help coming, at least not coming anytime soon.

Cliff’s wife shared his passion if not his paranoia, his children, with all that spending power went along or the ride. They understood that dad was afraid, but they just did not understand why. Why was survival so important if the rest of the world was gone? They were good kids, respectful and dutiful; they took the self defense courses, the shooting lessons, first aid and survival lessons. They actually enjoyed the semiannual camping/survival trips they took, one in the summer and one in the winter. Despite their survival compulsions, as parents they were not overbearing or overprotective, they were good, indulging parents. It was a strong and stable household despite the fall out shelter mentality

Cliff had been somewhat vindicated when the second hurricane of the season hit the northeast. Not as bad as the first one, but resources were so stretched around the town, he had the only power for over a week and with his great overstock was able to help and host his neighbors. Few had shared his ideas, or followed his lead ~ tho they did not think him a nut job, or say it aloud ~ but now most of them had begun to prepare for the worst. Cliff had planned and was ready for anything, everything except for his son’s burst appendix.
Posted by jj. at 11:27 AM 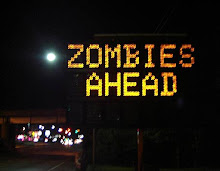